When Both Members of a Couple Have Childhood Emotional Neglect 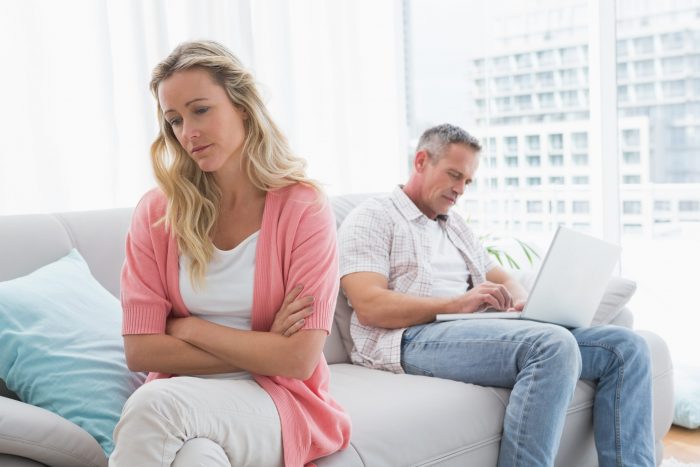 What happens when two people, each of whom grew up with Childhood Emotional Neglect, meet and marry? They create the doubly emotionally neglected couple.

Childhood Emotional Neglect (CEN) is a subtle, often invisible childhood experience that many adults experienced in their families. As children, they didn’t know it was happening. And as adults, they typically have no memory of it.

Yet its effects continue to hang over them like a gray cloud, coloring their entire adult lives. The cloud inserts itself into their marriages, causing emotional distance, miscommunication, and lack of intimacy.

When you grow up with parents who do not validate or respond to your feelings, your child brain knows just what to do. It builds a wall to block off the most deeply personal, biological part of who you are: your emotions. Safely tucked behind the wall, your parents (and you) can pretend that your feelings aren’t even there, or don’t matter.

Decades later, when you are in a serious relationship, a series of very predictable problems ensue. That wall that helped you as a child interferes. It blocks off the invaluable internal resource you need to bind and connect you to your partner: your emotions.

Interestingly, those who grow up with Childhood Emotional Neglect tend to be attracted to one another. When your own emotions are blocked off, you are bound to feel most comfortable with a partner whose emotions are also tucked safely away.

So what happens when two people who grew up emotionally neglected marry? How does the couple deal with two walls between them, over the years of being together?

Meet Jason and Betsy, the double-CEN (Childhood Emotional Neglect) couple. They’ve been married for 10 years, and neither is aware of their CEN. It’s Saturday morning, and they are having a mundane conversation.

Betsy: I’ll drop off Curt at basketball practice at 9:30. Can you pick up Emma from gymnastics at 9:45?

As she makes this request, Betsy is secretly worried that Jason will be irritated that she’s asking him to do something. So as she asks, she watches his reaction carefully.

Jason sees Betsy giving him a look he can’t interpret, and assumes she’s trying to manipulate him somehow. He decides to call her bluff by martyring himself to make her feel bad.

Jason: What’s the big deal? Why does this require us both? I’ll do both drop-off and pick-up.

Betsy notices the edge in Jason’s tone and assumes it’s because she asked him to do a task for her. “Would it kill him to chip in on the weekend?” she thinks to herself with aggravation.

Betsy: Just forget it. I’ll do both.

As Betsy does the drop-off and pick-up that morning, she seethes inside at how unwilling Jason is to help out with the kids.

Meanwhile, Jason sits at home feeling three competing things: frustrated at his “manipulative” wife, perplexed about what really happened between them that morning, and vaguely guilty that he is sitting at home while Betsy does all the work.

Eventually, the guilt wins out. Feeling bad, he starts making a big pot of chili, which he knows Betsy likes.

The 5 Struggles of the Double CEN Couple

You are divided by your walls.

No matter how connected you are by love, companionship, children, or history, you are not able to connect enough in the most important way: emotionally. It’s not that you don’t feel emotion (both Betsy and Jason have plenty of emotions in the description above), it’s just that neither of you is well enough in touch with what you are feeling so that you can share them and use them as you are meant to as a couple.

You each lack the emotion skills to understand what’s really going on.

While your parents were busy ignoring your feelings, you were missing an important childhood experience. You were not learning how emotions work. You didn’t have the chance to learn how to know when you’re having a feeling, identify that feeling, put it into words, or share it with another. These are the skills required to build emotional intimacy with your partner, and you may not even realize that you don’t have them.

Your interactions are rife with misinterpretations.

You probably noticed how very out of touch Betsy and Jason are with each other. Betsy views Jason as unwilling to help, which isn’t true, and Jason views Betsy as trying to pull something over on him, which she isn’t. Both end up feeling upset with each other for false reasons. And neither has the communication skills to discover that his/her assumptions and readings of the other are wrong.

Over time, you end up increasingly distant from each other.

In addition to the normal conflicts that all couples encounter, incorrect readings also contribute to the wedges that drive you farther and farther apart every day. The longer you are together, the more distant you feel.

Even if you love each other, it isn’t enough.

I see many double CEN couples in my office, and one thing I often notice is that they usually have a genuine bond of love for each other. But despite the love, one or both members of the couple senses that something very important is missing. One or both of the members feel, despite the love, uncomfortably lonely in the marriage.

If you recognize yourself and your partner as you read this, do not despair. There are answers!

You can use this newfound understanding to reach out to your partner. Now that you know what divides you, you can break down your walls, and power forward to a brighter, more connected future.

Because the great thing about Childhood Emotional Neglect is that it can be healed.

To learn how to take the steps to reach out to your partner and break through the walls that block you, see the book, Running on Empty No More: Transform Your Relationships With Your Partner, Your Parents & Your Children. To learn more about Childhood Emotional Neglect, see my first book Running on Empty.

CEN can be invisible and unmemorable so it can be difficult to know if you have it. To find out, Take the CEN Questionnaire. It’s free.

A version of this post was originally posted on psychcentral.com. It has been republished here with the permission of the author and psychcentral.