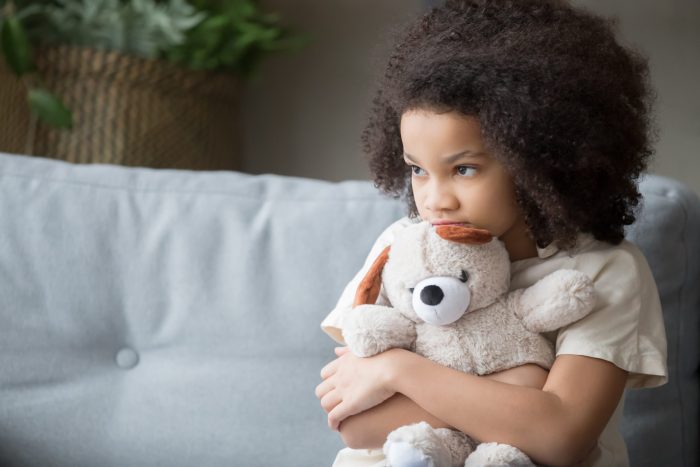 What is Childhood Emotional Abuse?

Ten-year-old Jack walks slowly home from school, dreading the moment when he has to walk through the door of his house. He has no idea what kind of mood his mom will be in. She may greet him warmly or she may lay into him, calling him a “lazy bastard, just like your father.” Filled with a dread of what’s to come, the closer Jack gets to home, the more slowly he walks.

What is Childhood Emotional Neglect?

Ten-year-old Sadie has lived in a large, mostly empty house with her mother since her parents split up. She misses her father and brother desperately. The household used to be active and busy; now it feels quiet, empty, and lonely. Sadie worries about her mother sequestered in her own room; so near and yet so far away.  “I wish Mom would talk to me sometimes like she used to,” Sadie thinks. She sits on the edge of her bed and sobs quietly so that her mother won’t hear her.

But the reality is that they could hardly be more different. They happen differently, they feel different to the child, and they leave different imprints on the child once he or she grows up.

Emotional abuse is an act. When your parent calls you a name, insults or derides, over-controls, or places unreasonable limits on you, she is emotionally abusing you.

Emotional Neglect, on the other hand, is the opposite. It’s not an act, but a failure to act. When your parent fails to notice your struggles, issues, or pain; fails to ask or be interested; fails to provide comfort, care, or solace; fails to see who you really are; These are examples of pure Emotional Neglect.

To see the different effects of emotional abuse and emotional neglect, let’s check in on Jack and Sadie 32 years later.

At 42 Jack is an accountant and is married with two children. Jack’s employers love his work and like him as a person. Nevertheless, he has switched jobs every two years, on average, throughout his career. In every job, Jack somehow ends up locking horns with co-workers. This is because he tends to take any form of mild request or negative feedback as criticism. Then he either hides, keeping his head down, or strikes back.

At home, Jack loves his wife and children. But his wife gets upset with him because he can be very hard on his children. Jack expects perfection and can be very demanding and critical, bordering on verbally abusive but never quite crossing the line to belittling or name-calling.

Generally, Jack goes through life braced for the next “hit.” He puts one foot in front of the other, wondering what negative event will befall him next.

At 42 Sadie is a Physician’s Assistant in a large, busy medical practice. She, like Jack, is married with two children. At work, Sadie is known as “the problem-solver.” She is able to resolve, smooth over, and answer every single problem or question that arises, so everyone goes to Sadie for help. Sadie is gratified by her reputation as super-competent, so she never says “no” to any request.

People look at Sadie and see a wonderful wife and mother. She loves her husband and children, and they love her back. But Sadie, her husband, and everyone else is puzzled about why her children are so angry and rebellious. They seem unhappy and act up in school. Sadie is exhausted by the heavy demands in her life. She’s so busy helping and giving to others she has no idea that she needs “watering” too. Sadie feels burdened, empty, and alone much of the time.

Jack and Sadie are good examples of the differing effects of emotional abuse and emotional neglect.  Jack struggles to manage and control his own feelings and reads malice into other people’s feelings. In contrast, Sadie’s emotions are suppressed. She lacks access to her own feelings so much that she lives for other people’s feelings. She struggles to set limits at work, and at home with her own children.

What Jack and Sadie have in common shows the overlap between emotional abuse and emotional neglect. They both feel depleted and empty. They both feel confused, lost, and somewhat joyless. Neither is able to experience, manage, or express their feelings in a healthy or useful way.

And now for the great news. Both Sadie and Jack can heal.

And even more importantly, it is vital that you recognize, own, accept, and learn about yourself, and realize why YOU matter.

**IMPORTANT NOTE: If you are a licensed therapist located anywhere in the world who would like to help people work through their Childhood Emotional Neglect and receive referrals from me, fill out this form to receive my newsletter for therapists and learn how. If you have read both of the Running On Empty books and taken one of my CEN Therapist Trainings, you can be listed on my Find A CEN Therapist Page.

A version of this post was originally posted on Psychcentral.com. It has been republished here with the permission of the author and Psychcentral.