How Loving Parents Can Emotionally Neglect Their Child 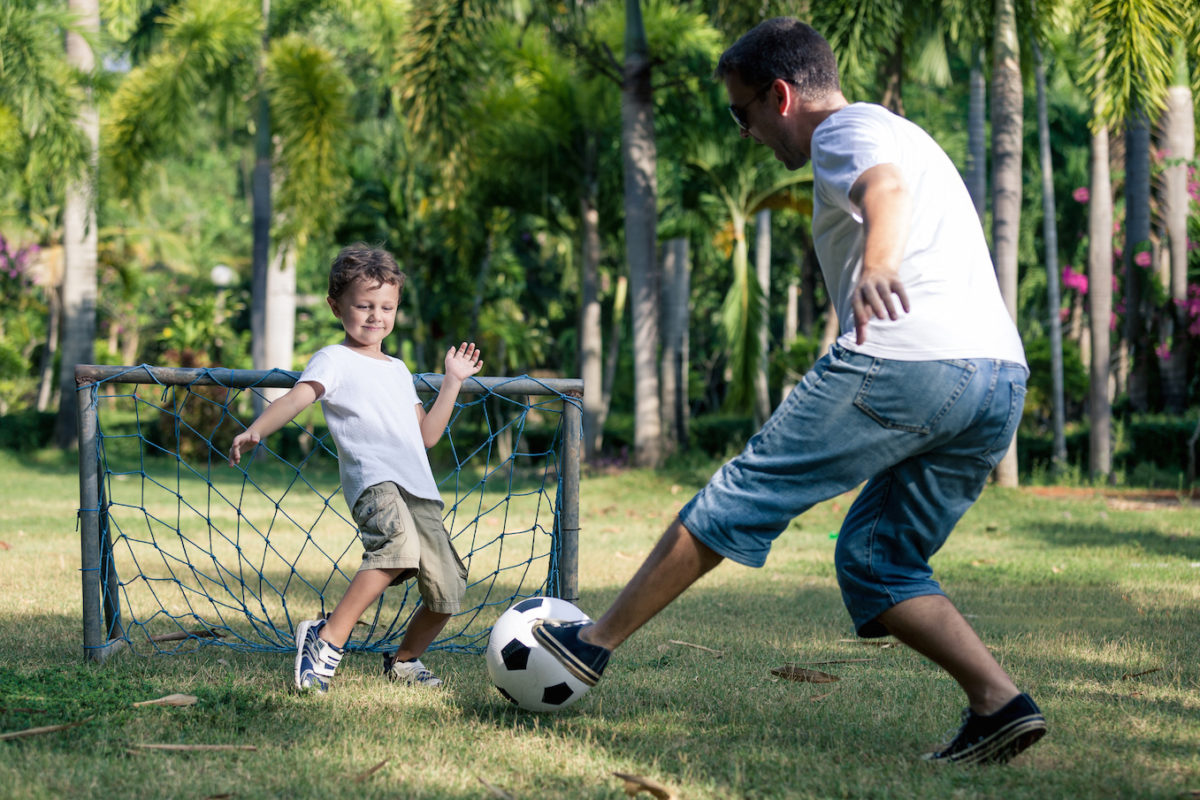 To understand how loving parents can emotionally neglect their child, meet Edward and Libby, both caring parents.

Edward the Child: Edward grew up in an abusive family. His alcoholic mother was mean, angry and physically abusive or threatening half the time, and ignored him the rest. Edward’s father loved his children. He worked 70 hours-a-week to support the family. In the few hours that he was home, he tried his hardest to appease his wife and to smooth over and hide her bad behavior. Edward and his siblings grew up fending off their mother and fending for themselves.

Edward the Father: Now Edward, to his great credit, wants to give his own children a better life. So he made sure that as soon as they each reached age 7, they started to master a musical instrument. He monitors their grades closely and requires them to play a varsity sport. “All three of my children are on their way to the Ivy Leagues,” he can often be heard saying.

Libby the Child: Libby grew up in a loving but large and somewhat chaotic household. The second of six children, she often was called upon to care for her younger siblings. In fact, her opportunities and activities were often limited by her responsibilities in the household. Libby grew up feeling bored, burdened, and frustrated that she was held back from the activities that she knew she would enjoy.

Libby the Mother: Now a parent herself, Libby loves her children every bit as much as her own mother loved her. Born rapid-fire, each less than a year apart, her three boys all love soccer and ice-cream. Libby works part-time but manages to schedule her hours so that she never misses a soccer game. Every day she drives the boys from one activity to the next, making sure they stay active, busy, and challenged.

In many ways, Edward and Libby are different. Edward was abused, and Libby was not. Libby’s family was large, and Edward’s was not. But in some very important ways, they are the same.

Indeed, they are each making a conscious effort to give their children a better life than they themselves had. For Edward, that’s attention and expectations. For Libby, it’s opportunity and activity. In these ways, they are both premium, top-grade parents who no one could ever fault.

But there is another factor, unseen and unknown, which unites these two. A factor which has left a profound mark upon them both, and is quietly, subliminally transferring, through them, to the next generation.

CEN is automatically built into every abusive household. A parent who abuses a child emotionally, verbally, psychologically, sexually or physically is, by definition, emotionally neglecting him. So Edward grew up with massive Emotional Neglect from his mother. Although his father loved him, his primary attention and care went to his own alcoholic wife. No one in Edward’s life was attuned to his feelings and needs. No one ever asked Edward:

How do you feel?

What do you want?

What do you need?

Why are you angry, or sad, or hurt?

Libby’s parents were both loving, and there was no abuse. But a very important ingredient was missing from her childhood. As an adult, Libby remembers her parents’ love for her, and she remembers caring for her siblings. She remembers feeling deprived of activities.

But what Libby cannot remember is what she did not get. So she does not ask her children those questions either. As she drives them back and forth, buys them ice-cream and cheers for them at games, she fails to notice what they are feeling. She fails to ask them what they need. She fails to see when they are hurt or sad or in pain. And she fails to teach them how to manage any of that.

Around and around the circle turns, delivering the numbing, isolating effects of CEN to another generation, and another and another.

Unaware that they can.

To learn more about WMBNT parenting and how to make sure you don’t pass Childhood Emotional Neglect down to the next generation, see the book, Running On Empty No More: Transform Your Relationships With Your Partner, Your Parents & Your Children.

This made me realise a lot of things about myself and my parents that I never truly thought about before. For so many years I thought it was a normal household but as time passed I noticed it was dysfunctional (and abusive thanks to my older sister). I’m an empath, I’m highly emotional and I always thought I was oversensitive or that I was exaggerating when I cried over things. My siblings would call me spoiled because I was the youngest and there was some resentment because I got in less trouble, but the truth was that I never got in trouble because I had high guard. I’ve always guarded myself from getting hurt but also from opening up to anyone. I managed to convince everyone, including my parents, that I was more open than I actually was. I never demanded anything, I never threw tantrums or anything because I didn’t even know that was a privilege a lot of children has. Everything I owned, including toys and clothes, were hand-me-downs from my two older sisters because I never learned to demand what I wanted. My mother was always the one I was closest to, so loving and definitely well-meaning – they both were, my parents. But never, not even once to this day, have they asked about my feelings. And as times got harder for me, I got more depressed, so much so I attempted suicide several times, I tried telling them but they just would not understand. They tried their best being supportive but understanding emotions on the same level is just not something they want to acknowledge, I believe. Almost like admitting there is something wrong with our family dynamics and there is. They neglected, and still do, to see the abuse my older sister was doing to me, and this was likely because of their own poor relationship with their own siblings. My dad was not around at all when I was younger. He was in the house, sure, but he never played with me, never talked to me, never went on vacations with my siblings and mum. All I remember is him sitting in the kitchen and smoking. As he grew older I think he realised that he wanted to be close to his children, but I feel so upset thinking about it that I don’t even like hugging him. I know he loves me but I don’t know if our relationship can be repaired.

Only after reading this article I realised that it must have been because of their own parents. My mother’s father was very emotionally distant and her mother ignored the behaviour. My mum had to be the mother-role to her younger brother that she loved dearly but then lost in a sad accident.
My father doesn’t talk much about his family, but I assume it wasn’t amazing. I know he used to get into fights with his family and he ran away to join the military at 15. I can’t imagine it’s a dynamic that helps you develop that emotional need either.

Thank you for writing this. I have a lot to think about.

I broke my cycle by not having any kids. Didn’t happen totally by volition. I never learned the right to want/demand but only to ask. I asked because I was finding things hard to believe. Anyway. This can get long, I have no intention to.

I am 37, I’ve never had a relationship and I am going to kill myself once she dies.

The rest can keep throwing around their precioys genes as if it’s not akin to a fungal infestation but a blessing. But in terms of pro&activeness this article is nice. Kudos.

Dear W, I am sad to read this. You deserve better and you can have it. Do not give up or harm yourself. There is lots of help available for you! Please visit the Find A CEN Therapist page on this site and make some calls. There is good help for you!

Thank you for this rich work! I’ve written down those questions, as I parent my two children. I am just so, so grateful for those of you doing this illuminating work. Through MBSR course, Al-Anon and reading of your work and a few others, I have really experienced a profound shift in my life. Now, the narrative around WHY my parents weren’t able to give me what I needed is not so personal, so fraught, so painful. I am learning to re-parent in a way that feels true and nourishing. I am just in awe of how much things can truly shift. What a gift to my children as well to do this healing work. Such a gift, the tools to heal. It can be so messy, and so painful, but on the other side is a new landscape.

My mum tried care me when dad wasn’t around or chasing her to get out on road make cash for him. He finally noticed I existed when I was twelve and my body started to develop curvy. He started sending me to work with mom selling and treating me as his girlfriend.

That is terrible Shyra. I am very sorry that happened to you. I hope you will talk with a therapist about this traumatic childhood experience.

My mother was depressed from the neglect in her own upbringing and her marriage to my father. She was an alcoholic, something my family never acknowledged and I didn’t until long after her death. Reading Running on Empty at 58 yrs changed my life and understanding of self. I “see” my self and my family of origin differently. Now I’m wondering if I was as successful at breaking the cycle for my own children as I’d thought. I guess I’ll ask them!

My parents were both alcoholics, subsequently, when I was born, my Grandparents raised me up from an infant. Because
they were from another generation, they simply gave me all of the material things possible when I was growing up with them, with the main exception of
communication in all areas of my life. I always felt extremely different from my classmates. I became extremely rebellious when I hit 13 years of age. I suppose that I was desperately looking for the attention that I never received when I was younger. I would find myself involved in all of the wrong male relationships during my lifetime because I was so afraid of being alone! I can remember when I was an infant in my crib, and being so terribly afraid of what would happen to me if/when they passed away!
I don’t know why I felt so afraid of being alone in life! I have an issue with TRUST in everyone these days. When my Grandparents died, I was devastated. I miss them both so much, even though I didn’t get the emotional support that I should have been given!