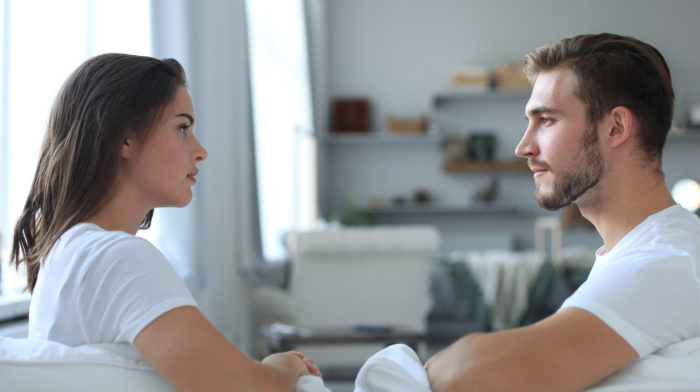 “Sometimes I just feel like walking away and never coming back,” Craig finally said haltingly, after a long uncomfortable pause.

When he looked up into his wife Liz’s eyes, he was shocked at what he saw…

As a couple’s therapist, I’ve worked with hundreds of couples over the years. If I had to name the one most ubiquitous challenge that I see couples facing, it’s this:

How to know what you’re feeling, and manage those feelings so you can share them with your partner.

It’s just so much easier to talk about logistics and happy things. The kids, our jobs, finances, vacation plans; these are all important. And they all share one common factor: they mostly happen at the surface.

The real glue that holds two people together in a way that is strong and true does not dwell there on the surface. That glue is made of emotion, feeling, conflict and, yes sometimes pain. These can only be accessed by courageously wading deeper, into the messy world of emotions with your partner.

Literally, all couples struggle with this to some degree. But the ones who I see having the most difficulty with it are couples in which one or both partners grew up with CEN (Childhood Emotional Neglect). When you grow up in a household where feelings are ignored or discouraged, you have little opportunity to learn about your emotions: how to manage, express and work with them. This can pose a formidable challenge to any committed relationship.

Here is an easy-to-learn technique that you and your partner can use to access each other’s hearts and emotions, and build that valuable relationship glue. It’s called The Vertical Questioning Technique.

First, it’s important to understand the opposite of vertical questions: horizontal questions. These are the questions that you ask your partner on a day-to-day basis. Here are some examples:

Why are you home late?

What are the plans this weekend?

How much did you buy?

What do you think we should do?

All of these questions have value, yes. But they are geared toward gathering information, not deepening your relationship.

In contrast, vertical questions are geared toward accessing emotions. They are challenging questions that make your partner look inside, not outside. They challenge him to go deeper by looking more deeply into himself. Here are some examples of vertical questions:

How do you feel about that?

No, really…why did you really say/do that?

Are you angry? Why?

You look sad. Are you?

Do you realize that your expression (or body language) doesn’t match your words?

Yes, it’s true, these questions are not for the faint of heart. They are challenging and can be difficult to give and to receive. But they will take you somewhere real and meaningful.

Now let’s revisit Craig and Liz so that you can find out why Craig was shocked by what he saw in Liz’s eyes. Here is the full story.

Liz had noticed that for weeks, Craig had been coming home from work unusually late. She was worried that he continued to be angry about a disagreement they’d had several weeks ago. Several times she had asked him if anything was wrong. Each time he’d smiled and said, “No, not at all, everything’s fine.” Yet he continued to be distant and disconnected from her. He talked easily about logistics and plans but seemed uninterested in her. Try as she might, she ended up feeling frozen out.

Liz: You’ve been coming home late, and you seem kind of distant. Is anything wrong?

Liz: Wait a second. Do you realize that your words don’t match your body language? Your smile doesn’t look real, and you’re walking away as you tell me that everything’s fine. Could there be something else going on with you?

Craig pauses and looks annoyed for a moment. Then the annoyance passes, and he looks perplexed. Liz waits while she sees his attention turn inward.

Craig: I-I don’t know. What’s the big deal? (but he is clearly flustered by Liz’s questions).

Liz: I’ve been sad lately because you seem so distant and disconnected. Can you please try to figure this out for me? I don’t want to live like this.

Craig: (Looking truly concerned for the first time, as he sees his wife’s sadness) Well, believe me, I’m over it. But I still can’t believe you talked to my mother about my drinking problem behind my back. It was a total violation of my trust. I can’t imagine why you would do that to me. Obviously, you don’t care how I feel.

Liz waits while Craig looks at the floor, tears welling in his eyes.

“Sometimes I just feel like walking away and never coming back,” he finally says.

Craig doesn’t see it, but while he’s talking Liz’s eyes are also filling with tears. She feels a combination of sad because she hurt Craig, angry that it’s taken him so long to say this, but relieved and grateful that he’s finally saying it. When he finally looks up, Craig sees how much Liz truly does care what he needs, feels and thinks.

Believe it or not, it almost doesn’t matter what happens from here. Liz’s Vertical Questioning (and her willingness to be vulnerable by sharing her own sad feelings) has helped Craig access his true feelings. And now they have shared what I call an emotional-meeting-of-the-minds.

It is truly a golden moment. Craig and Liz have both sat with their strong emotions together and felt each other’s pain. This moment forms the glue that will bind them together and keep their love and their passion strong.

So don’t be afraid. Ask those hard questions. Challenge your partner, and challenge yourself. It’s the best way to show, and strengthen your love.

To learn more about Horizontal and Vertical Questioning, Childhood Emotional Neglect, and how to build the emotional skills that are needed for a strong marriage, see the book, Running On Empty No More: Transform Your Relationships With Your Partner, Your Parent & Your Children.

A version of this article originally appeared on Psychcentral.com. It has been republished here with the permission of the author.

Do you have any books you would recommend that dive into the vertical/horizontal questioning?

Hi C, no I don’t know of any. It’s not a well-known technique at all.

I have tried this method of communicating with my partner. Often his actions don’t match his words. He’ll tell me he’s not angry, or that we’re fine, but I see him turn away, or reject my attempts to reach out physically- e.g. an embrace or a tender touch, or suddenly change his disposition from warm and friendly to cold and incommunicative), he will
Either become furious because he thinks I’m “lying, trying give him emotions he doesn’t have”, or he mocks me, says I’m being ridiculous, “overthinking”.

Dear Jennifer, please go see a therapist. Check the Find a CEN Therapist page on this website. Take your husband if he will go, but go alone if not.
This is important. It is not OK for you to continue on like this.

How can one start asking these questions when a spouse won’t or isn’t interested in opening up. Have been reading your 1st book on CEN, and working on healing from past trauma beside the CEN. As I show and express more emotion especially when we’re having a conflict/ disagreement, it seems more difficult for him to accept. Eg. Yesterday I was very upset because my spouse promised he would help me with something that was a lot of work. This was said to me over a week ago, and then he wasn’t there to help, even though he saw how much there was to do and left. When he got home later I told him how I felt and his reply was that I should have said something. My answer was that why do I have to ask again, when he was the one who committed to saying over a week ago he will help with it. How is it that I can remember and see when help is needed and give it, but he can’t. His reply to that was , that I know he forgets things because his mind his busy with so much and the same pattern happens with others, not just me. So I should have reminded and asked him to come help. And yet I feel I shouldn’t have too, especially when he made that commitment to me & that I am not just ‘others’ but his wife. Which makes me feel disconnected from him when he does this.
I want to be able to ask vertical questions and from past experience in trying, he isn’t willing to be open with me.
So how can I do this? I love him and feel a somewhat emotional disconnection in our marriage. And am not always open and true to telling him exactly how I feel for fear of hurting him.

Dear SV, it sounds like emotion skills like how to communicate while upset or angry are lacking in the relationship. I suggest you try to get your husband to read Running On Empty, and also to go see an CEN couples therapist with you.

Thanks Dr. Jonice your articles, hard work and contribution are really appreciated and helpful!

I am very glad to hear that Mho. Take care!

It’s hard to handle vertical questions when they feel like they have an assumption built into them that doesn’t match my reality. Or the question is really about calming the person’s own fears instead of any real concern about me. I know I can start working on this myself, but there are so many layers of hurt to get past, it feels impossible.

Dear JP, it must be your parents or someone in your current life (or both) who was/is questioning you in this way. You are right. That is not how vertical questioning is supposed to go. But please keep in mind that well-meaning people who care about you do not ask questions that way.

Yes, someone currently. I feel like a crazy person because I don’t know whether I’m being overly sensitive and am reading things into the question or if it’s really there. Also, if I confront the person about it, they defend themselves and say they just care, but if I’m silent, nothing ever changes either. Trying to trust God to bring about the right situations to bring understanding and true care and healing in the hurt places.

This resonates so much.